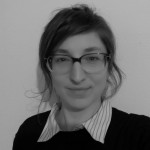 Born in Gleisdorf (Styria) in 1980. Worked from 1999 – 2007 as a film maker. She studied History in Vienna and St. Petersburg from 2007 – 2013. From 2011 – 2014 she worked as a research assistant for the research project Ehen vor Gericht (Marriages at Court). After this she worked until February 2016 as a scientific assistant in the project Sammlung und Langzeitarchivierung von Oral und Video History Interviews mit Opfern des Nationalsozialismus (Collection and long-term archiving of oral and video history interviews with victims of National Socialism) at the Technical University and the Austrian Mediathek. A project which was funded by the Nationalfonds and the Zukunftsfonds of the Republic of Austria. Since February 2016 she has been the recipient of a DOC scholarship awarded by the Austrian Academy of Sciences and is studying at Institute of Contemporary History at the University of Vienna.